I hate Urban Myth. And democracy. 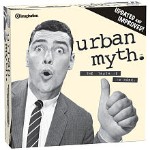 Let me tell you something I learned at Game Night: Urban Myth is a terrible game. I learned this because at the start of Game Night, I put it to a vote; which game should we play? By a small margin, the vote went to those in favor of removing the shrink-wrap and cracking open a brand new game. As I feared, this game was TERRIBLE. But horror of horrors, the person who finally won this game - and therefore got to choose what we played next - decided that now that we knew how the game worked, naturally we should play it AGAIN.
As it turns out, our first game lasted only about 20 minutes. This, we learned is a fluke. Our next game lasted about an hour and a half, and had me begging for people to cheat so we could get it over with more quickly.

"What's so bad about Urban Myth" you ask? To put it nicely, Urban Myth is a game designed by lonely and frustrated nerds to prove once and for all, their sad and mighty nerd superiority. Players are asked questions and it is their tedious job to guess which is Truth and which is Myth, occasionally gaining letters which will help them end the tortuous agony of this game, but only when the stars align, and their marker is on a spot containing a letter they actually need at the time.


The answer: No. While he was playing a musical instrument while Rome burned, it could not have been a fiddle because fiddles weren't invented yet. 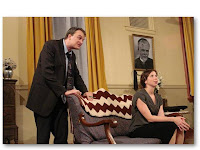 In nerdspeak:
Technicaleeee Nero could not have been playing a fiddle while Rome burned as it was invented in 900 A.D. Only a FOOL would confuse a classical lyre for a fiddle - I mean, a bowed fiddle MAYBEEEEE, but Nero was dead 750 years before the first bow was constructed. Puh-hoy-hoy!
Democracy is a tough row to hoe, people.
Posted by Bashionista at 6:54 AM