A Slow Boat to Drunktown


I used to work on a party cruise ship waiting tables, delivering drinks, and doing a little dance number as the ship left port. One night the ship was rented out by a group that was . . . less than classy. The guys were thugged out, and plenty of the ladies were sporting long acrylic nail extensions and leopard-print spandex mini-dresses. They all shared one thing in common - the all-American desire to get their money's worth at the open bar. 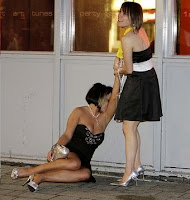 By the end of hour two, I was surrounded by people who were drunker than the drunkest drunkards I had ever seen. I made the mistake of going to the bathroom, and ladies were puking into every available recepticle - including little wastebaskets and SINKS. Back out in the bar area, I saw a girl walk towards the bar, fall on her ass, and then continue CRAWLING towards the bar where she hauled herself up the bar stools and demanded another drink.


When the bartenders tried cutting people off, the organizer of this little pleasure cruise started shouting about how he had paid for an open bar and how he would demand his money back. Oh, give me a break.
There was a massive sheet cake on display at the end of the buffet line. I was walking across the room when I noticed an enormous woman stumbling toward it. She was . . . top heavy to say the least. I froze to the spot as I watched her fight her staggering zigzag to home in on the cake. Aaaand at the last second she tripped and face planted right into it. For a moment, people froze in horror. And then, this woman came up for air, wiped the cake from her face, and threw a wad of it at a girl on the buffet line.
﻿
﻿

Suddenly everyone in the room is throwing food at everyone else, servers are ducking behind their trays and running for the exits, my manager is standing next to the bar, weeping. Do you have any idea how long it takes to reroute a party ship and bring it back to port? An eternity as far as I'm concerned. But in reality, we dumped about 100 ridiculously drunk and cake-smeared party-goers in the empty parking lot about an hour and a half before their limos were scheduled to come back. As we worked to clear the wreckage, and my manager kept wailing about how there was no way our cleaning service could get the cake out of the carpet before tomorrow's lunchtime cruise, we could see our angry evicted passengers stumbling around the parking lot, looking like zombies who had eaten the customers of a large bakery.
My question is, What in God's name could we have done to prevent this?
Susan D
Dear Susan,
The no-fun answer is that it's the bartender's responsibility to cut people off before they drink themselves into the walking dead. But if you as a server suddenly realize you are in a room where nobody has their sea legs, get between them and the cake, and start rowing the boat to shore.
The Bashionista
Posted by Bashionista at 10:03 AM