I'm guessing not, because, frankly, beer flavored cake sounds disgusting. But wait -- hear me out. I don't mean cake that tastes like beer. I mean cake that is flavored with beer, and subsequently tastes rich and moist and malty, and also slightly hoppish. Hoppish? Oh, you know, like hops. 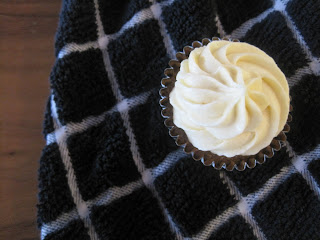 These beer cupcakes are slightly chocolatey, slightly hoppish, and entirely satisfying. The round, chocolatey, beer-ish flavor of the cake is offset by bright, tangy orange cream cheese frosting, and the whole thing just kind of works, and you'll want to eat them slowly, and drink beer while you do, and maybe you could share them, and why are you still here? Go make some of these guys and throw a party. A beer and cupcake party. Because, as it turns out, those two make a pretty nice pair. 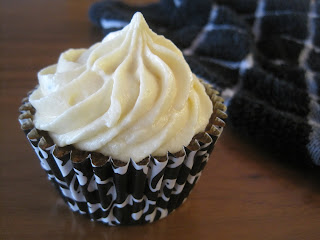 Ingredients: For cupcakes:
For frosting:
Directions:

To make the cupcakes, start by preheating the oven to 350 degrees and filling a cupcake pan with cupcake liners (this recipe should make about 24 cupcakes).

Put the beer and butter into a saucepan and heat gently until the butter has melted. Whisk in the cocoa powder.

Using a mixer, beat together the sugar, sour cream and eggs, and stir in the vanilla. Add the beer and cocoa mixture to the sour cream mixture, and mix until combined. Add the flour and baking soda, and mix gently until incorporated. The batter should be quite runny.

Pour the batter into the prepared cupcake liners and bake until golden and puffy, about 25 minutes (a toothpick inserted into the center of a cupcake should come out clean). Let the cupcakes cool while you make the frosting.

To make the frosting, beat together the cream cheese and butter until smooth and creamy. Add the confectioner's sugar and beat, starting slowly, until well-mixed and smooth. Add the orange zest and vanilla and beat to combine. If you find the frosting too stiff, add a bit of milk to loosen it. If it's too soft, add more confectioner's sugar until desired thickness is reached.

Once the cupcakes have fully cooled, spoon or pipe the frosting on top. Enjoy as soon as possible.
Posted by molly at 6:46 AM