Who Invited This Drunken Idiot? 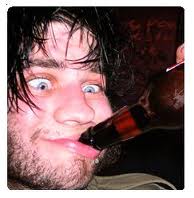 I threw myself a birthday party. It was 20 or so of my friends . . . plus this super drunk dude somebody brought. First he started hitting on all my girlfriends. Then he started grabbing each and every one of them and forcing them into taking arm-length pictures with him. At one point he cornered me and went on and on about how Michele Bachmann has a lot of intelligent things to say, and for his grand finale, he locked himself in the only bathroom and passed out with no pants on.

My friend who brought him was really apologetic, but it's really too little, too late. I hate confrontation, so I just spent most of the night fuming. What can I do the next time some idiot tries to ruin my birthday party? - Liz C

I hate to break it to you, but the number one cause of drunk people is: parties. Even if you don't invite that drunken jerk ever again, there's just no telling when a friend will drink the beer too far. My advice to you is to strike a balance - let the little things roll off your back, but when someone crosses the line, do not hesitate to bring the smack down. Here are my favorite strategies:

1) Invest in Mixers
Some people are going to show up drunk. Some people will come with a mission to get obliterated. Those people are unstoppable. But do what you can to keep casual drinkers out of harm's way. Stock up on soda and juice so people can pace themselves.

2) Run Friendly Interference
As the host you should _never_ get cornered. The minute someone starts telling you that The Lion King promotes homosexuality in children is the minute that you really need to go refill the chip bowl. It's not rude - it's your job to stay mobile. And while you're flitting about the room, you can swoop in and rescue your poor cornered friends: Oh hey! Sorry, can I borrow Joanie for a second? I need to show her . . . something.

3) Don't Be Afraid to Be the Heavy
If someone starts messing with your things, commandeering the stereo, or starting to set up an unauthorized game of beer pong, TAKE CHARGE. Your house, your rules. Don't panic, don't get shrill - just speak with the calm assurance that you're in charge, and that you are speaking for the vast majority of people who didn't come over because they were nostalgic for frat parties. Do enlist your most ominous friends to back you up, if the drunk in question is becoming belligerent.

4) Have the Police on Speed Dial
I was once at a party where a random drunk guy off the street followed a few guests who were buzzed in at the door. We were about 25, he was about 50. He reeked of Miller High Life and living on the street. Within three minutes it was abundantly clear that he did not know either of the hosts. The hostess asked him firmly to leave. He started trash talking her and wandering into the kitchen. One of her friends followed after him, telling him, ok, look man, you don't know anyone here, I think you'd better leave. The guy started shouting that he's an ex-marine with 10 confirmed kills - how many people have you killed, you feckin' fairy?! Then he started throwing beer bottles across the kitchen.

If your party starts feeling more like a home invasion, do not hesitate to call the police - or at least tell the guy you're about to call the police, because odds are that drunkenly crashing random house parties is in violation of his parole and he'll be off like a shot.
Posted by Bashionista at 12:16 PM