How's that New Year's resolution coming along?  You know, the one where you vowed to work out constantly while flossing your teeth and standing up straight and also whipping up your daily raw green smoothie?

Going well for you?

Not fair, I know.  It's an admirable goal, to be healthy in the new year.  I should be pumping you up, not jabbing you off your treadmill.  Lovingly jabbing, but still.

How about some homemade granola?  It's perfectly easy to make, entirely adjustable to individual tastes, makes a cold winter kitchen toasty with the smell of warm cinnamon, and, best of all, it's healthy!  That cinnamon that smells so good?  Full of iron and calcium.  That flax seed?  Packed with antioxidants and omega-3 fatty acids (in other news, I kind of love the fact that "fatty acids" are considered healthful).  Served with a bit of low fat Greek yogurt and fresh fruit, and you're in the business of resolutions. 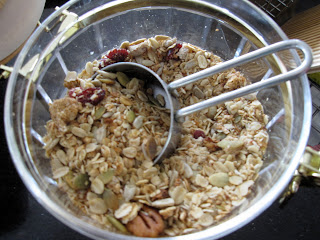 Note: There are no real set quantities for this recipe – basically, you’ll need enough raw oats to cover the bottoms of two 9×13 lipped cookie sheets or jelly roll pans, and enough of everything else to sprinkle liberally on top. If you’re particularly fond of a certain ingredient, go ahead and pile it on. If you’re not so fond of another, skip it!  Just enjoy the sprinkling and stirring, and the wonderful smell of sweet, toasty nuts and grains. This makes a lot of granola, so feel free to half the recipe, but it also freezes beautifully, so don’t be shy about making the whole batch. 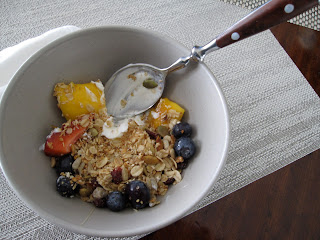 Spread a thick layer of raw oats onto the bottom of two baking dishes (9×13), then sprinkle plenty of flax seed, wheat bran, coconut, almonds, and seedson top of the oats (roughly a handful or so of each), and stir until the oat layer is flecked through.

Mix the canola oil, peanut butter, honey and cinnamon in a microwave-safe bowl, and microwave on high for about 1 minute until warm and blended. Divide the warm peanut butter mixture between the two pans and stir well into the dry ingredients.

Bake the mixture in the preheated oven for about 20 minutes, stirring occasionally, until toasty and golden. Cool granola thoroughly before storing in the freezer (it will keep, frozen, for about 4 months).