Please Get This Drunk Girl Off My Living Room Floor 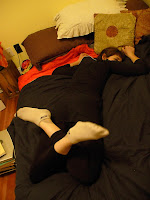 Dear Bashionista,
I have a friend who has a tendency to overindulge and almost always has to sleep it off at the party - usually somewhere appropriate, like a bed. Sometimes on the couch in the middle of the party. Sometimes flat out in the middle in the floor. It was endearing and cute at first but it's getting awkward trying to make excuses for her, and frankly kind of annoying finding her passed out in the bed I was planning on sleeping in. Plus, I'm starting to think she has a problem.

As someone who once decided to take a little wine nap in the middle of the floor at a writing-conference after-party, I am going to give you a decidedly biased answer: your friend isn't hurting anybody, and she may not even be hurting herself. Sleeping it off when you've had too many is infinitely better than driving home because you've had too many, and annoying as it may be to step over her inert body, she's a less annoying drunk than someone stumbling around knocking over your valuables, or someone in a rolling blackout who mistakes your sofa for the bathroom.

That being said, her annoying behavior *is* hurting her chances of ever being invited back to your house. Here are a few options you have for getting a grip on the situation:

Sometimes people get drunk not because they are hell-bent on destruction, but because they are incredibly thirsty and someone forgot to buy any mixers. As a host, you want to make sure that your guests have the tools they need to pace themselves. Session beers (in other words, beers with lower alcohol content) were invented for this purpose. You also want to make sure that there are plenty of mixers *and* plenty to munch on; drinking on an empty stomach can turn anyone into a lightweight.

If you know you've got friends coming who tend to overdo it, you may want to mix up a really tasty non-alcoholic beverage - like rainbow punch or mulled cider. People can still opt to spike it, but even if they don't, they won't feel like they're missing out on all the fun.

In a perfect world, all of your guests will remain upright and articulate until the party is over. But be prepared for things to go awry. Have a quiet space in your house that is free of coats, be it your bed, your spare bed, an air mattress, or a loveseat tucked away somewhere. If you notice someone getting the nods in the middle of the party, kindly ask if they'd like to take a power nap in the other room. Annoying as it may be to kick them out of bed at the end of the night, you're doing the right thing.

Let's say you've thrown three parties and every time without fail your friend is passed out before the clock strikes twelve. You're starting to suspect that this isn't an isolated problem. If you care about your friend, you may want to try talking to her. Pick a time when you can talk to her one on one in a non-party situation - perhaps brunch the next day when she finally crawls out of bed. Let her know that you're a little bit concerned about how much she's drinking and want to know if she's ok. Let her do most of the talking. It's possible that she's going through a tough time, and it's also possible that in her mind drinking herself to sleep is a perfectly normal way to spend a Saturday night. If she knows that people are starting to worry, that may be a good signal for her to tone it down the next time.

If she does have a more serious drinking problem, it's not for you to fix it. But if you encourage her to get help if she needs it, and let her know that you care, then at least you'll know you've done what you can.
Posted by Bashionista at 7:53 AM