When Arielle & Kyle started planning their wedding at the Six Flags Great Escape Lodge they wanted to throw the party of their dreams - without breaking the bank. Saving the $10,000 more it would have cost to have it at any other Lake George venue was a start, but with the help of their talented and generous friends and family members, they really made the wedding into a group effort - and saved a fortune.
Here's the story of their wedding journey. It's a top 10 list of the things that made their wedding great, moments they loved, and ideas you can steal:

1. Having Lovely and Amazing Parents

Arielle and Kyle are fortunate to have incredibly supportive parents - and they each stepped up in special ways. Kyle's mother designed beautiful invitations and programs and took care of the printing, and she also helped them design the seating chart. Arielle's father built them a wishing well for gift checks at the reception. And Arielle said she was blown away by the bridal shower her mother and the bridesmaids threw for her. The shower took place in her mom's backyard, which had been completely transformed; she rented a tent, chairs and tables, set up a bar station, and decked the whole thing out in the wedding colors of red, white and black.

Luckily, the mother of one of Arielle's close friends owns her own floral business - The Arrangement Shoppe in Hudson Falls. Arielle was thrilled with the way the flowers came out. She worked with the shop to design her own arrangements, and they gave her a great deal. "The bouquets were big and glamorous - but cheap!" 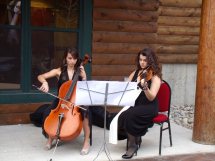 Kyle's sister, Sydney Carella, plays the cello, and their friend's daughter, Beth Mirahoer, plays violin, so they asked the two girls if they would do them the honor of playing during the ceremony. The sound carried beautifully in the stone courtyard where they said their vows - the effect was elegant and moving.

The Great Escape Lodge throws in the services of a Justice of the Peace as part of the wedding package, so that was one less thing the couple had to worry about. And it just so happens that their officiant was someone they frequently see at their local pub. They thought it was pretty funny that one of their drinking buddies would be the man to marry them.

Arielle & Kyle had the genius idea of hiring The Magnet Man to work their wedding. For a set price, they could create an unlimited amount of photo magnets. Guests could pose and walk away with their own photo magnet party favor - and the couple gets to keep a high-resolution CD of all photos taken, so it's essentially a photo guest book. Perfect.

On top of that, their cousin offered to photograph their wedding for free! Kyle tells me they bought her a high-quality digital camera for her to use and keep. They were really happy with their photos, and their cousin now has the experience of a wedding under her belt, and a camera for future gigs. Everyone wins!

Saving money was important to Arielle & Kyle, but they made some choices that put the party first. The most expensive time to have a wedding is on a Saturday in the evening - but they chose this over an afternoon ceremony or a Friday or Sunday evening so their guests could party the night away.

The one real splurge they had was having an open bar - Kyle's mother was kind enough to make that her gift. The couple knew they wanted more than just beer or wine, and they wanted to keep it coming. Kyle laughs and says, "That's very important for our kinds of people." And with everyone able to walk from the party to their rooms in the Lodge, it was an ideal party scenario.

I ask Arielle if she had to pick the moment in the whole day that moved her the most and without hesitating she says: their first dance as man and wife. They were dancing to their song, "When You Say Nothing" by Allison Krauss, surrounded by all the people who love them, and she tells me, "I waited for that moment my whole life . . . I'm gonna cry right now!" She also loved dancing with her dad to "I Loved Her First" by Heartland - "What father doesn't dream of that moment?"

Arielle & Kyle remember the first time they heard Dick White play their local bar. They walked in the door and heard him playing one of their favorite songs - Jason Mraz's "Lucky I'm in Love with My Best Friend" and they became instant fans. He has a Friday night residency at the bar, so they've gotten to know him over the years. When Arielle & Kyle started thinking about music for the wedding, Kyle says they knew they wanted live music - the kind of cover band who would play a little Stevie Ray Vaughn.

When they first started shopping around, they talked to a Beatles cover band . . . who wanted $5,000 to play their wedding. They went to talk to Dick White and braced themselves for more bad news. Instead, since they're regulars at his show, Dick quoted them an amazing price. Kyle says, "he told us, '$200 - plus $50 if you want harmonica."

The band played a great set, and then they turned it over to a friend who DeeJayed with a playlist on her iPod. Kyle's been playing in bands for years, so he had his own PA already.

Once they had designed the perfect party, Arielle and Kyle had very strong - and opposite - ideas for how they would spend their time. Arielle says that from the beginning she made it clear: she wanted to dance. She did not want to spend the majority of the wedding going table to table talking to people - if they wanted to see her, she'd be on the dance floor. Kyle on the other hand? "I don't dance. Slow dancing only." So while Arielle was in her element, throwing down hard on the dance floor, Kyle was in his; going table to table chatting with the rest of their loved ones. It actually worked out perfectly. Arielle & Kyle knew exactly what kind of cake they wanted - a spice cake with cream cheese frosting. And luckily one of Arielle's co-workers was happy to bake it for them. They paid her $200 and absolutely loved how the cake turned out - stunning presentation, crazy deliciousness.


10. Lining Up the After-Party

The Great Escape Lodge is pretty remote - there was no downtown bar scene that I could detect in the area. But Arielle & Kyle had their bases covered. They were assured by the Lodge that "Johnny Rockets was willing to stay open as long as people were spending money!" So when the reception ended, most of the party headed on over and took over Johnny Rockets, talking and drinking long into the night.
Posted by Bashionista at 6:12 AM

Email ThisBlogThis!Share to TwitterShare to FacebookShare to Pinterest
Labels: Marry Me, Take My Advice