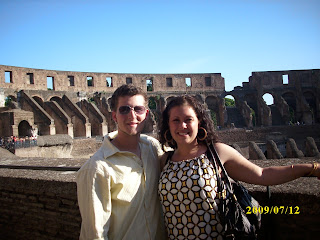 Arielle Clagg & Kyle Dingmon were married in October 2010 at the Six Flags Great Escape Lodge, in Queensbury, home of New York's biggest indoor water park. No, they weren't shouting their vows as they shot down a body slide - but they did take full advantage of everything the resort had to offer. They loved the rustic feel of the Lodge where guests were able to stay, kids and adults alike were entertained at the water park in the afternoon - admission was included for all overnight guests - and the intimate courtyard ceremony and classy reception were all had for a good $10,000 less than the other venues they checked out in the Lake George area.
Click here for 10 tips from Arielle & Kyle for planning a fantastic wedding on a budget. Click here for the details of their menu. Click here for a playlist of some of their favorite songs from the reception, downloadable on iTunes. And on Thursday we'll wrap up wedding week with a photo gallery - their wedding story in 20 pictures. 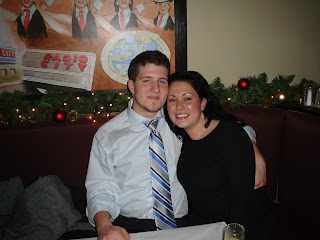 But first, let's get to know Arielle & Kyle and the story of how they got together. They first met at Applebee's in Saratoga, New York - where they were both working as waitstaff. I ask if they got together right away and get a resounding "no." Arielle was 25 at the time, and Kyle wasn't yet 21 - she wasn't sure that dating a younger guy was such a great idea. Kyle would ask her to hang out with the rest of the kitchen staff after work - "I was a big party animal back then," he says, "but she would rather go home and hang out with her cat." Then shortly after Kyle turned 21, Arielle gave him a chance. On their very first date they went to Congress Park to watch 4th of July fireworks. That kicked off a summer of bonfires and pool parties, and before they knew it, they were inseparable.

I ask Arielle when she knew it was serious. She says it was a few months in and they were together all the time. Even though they were having a blast, more importantly Arielle says she realized that Kyle was "more responsible than anyone I had ever dated." He may have only been 21, but he had a job, his own apartment, his own car, and his own motorcycle. When Kyle asked her to move in after only a few months, she didn't hesitate. 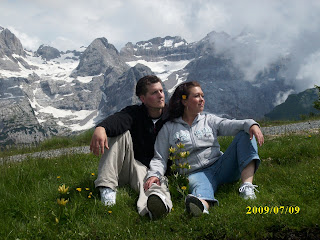 Kyle moves fast - only seven months after their first date, they bought a house together. "People thought we were crazy," he says. "They'd say, we love Arielle, but you should wait until you can afford it yourself, just in case." And astonishingly, at that point Kyle could have afforded it himself; he tells me that he has been working two jobs for the past five years. Typically he would have one full-time and one-part time, and then when a better job came along, he'd replace one of the jobs with the new one. This year for the first time he has only one - great - job; he's now a member of the electrician's union. And Arielle is now a dental assistant. This is what makes them such a great match; they're both responsible, hard-working and ambitious - but they definitely know how to party. In fact, Kyle jokes that the moment he knew Arielle was the one was at a party when he watched her win a trampoline backflipping contest.

I ask Kyle when he knew he was going to propose. He said he bought the ring just shy of their three-year anniversary, right around the time they were invited to join some extended family on a trip to Italy. Was Arielle suspicious that he might be planning to propose? Yes and no.
As soon as she had some time alone with Kyle's luggage, she searched everywhere for a ring . . . and found nothing. She messaged her girlfriends back home - nope, it isn't going to happen. 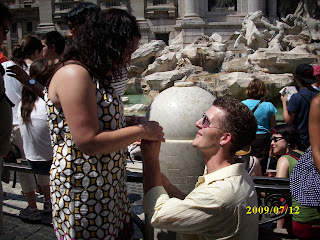 But Kyle is a tricky one - he asked his mom to carry it through customs so Arielle wouldn't see it. When the moment came and they were standing by the Trevi fountain, with his little sister standing by, camera-ready, Arielle was stunned to see Kyle get down on one knee, asking, "Will you be my wife?" Unfortunately, the next moment was even more shocking, as Kyle opened the box and the ring popped out and started rolling down the cobblestones. "All I heard was ding-ding-ding-ding as it kept rolling!" Arielle laughs. Kyle leapt to his feet and started running through the crowd of tourists after the ring. Kyle says he learned a valuable lesson about transporting a ring box in a pair of cargo pants.

Arielle returned from her Italian vacation ready to shock all of her coworkers. Instead she got to the office and found out that everyone already knew. Kyle couldn't imagine how that could be since the only person on earth he had told was his best man. It turns out that the shopgirl who sold Kyle the ring is a good friend of Arielle's co-worker - small world! Luckily every last one of her friends kept from ruining the surprise.
Posted by Bashionista at 8:01 AM