﻿
﻿ ﻿Meghann Neely and Joe Gardner were married in March 2011 in the Desert Botanical Garden in Phoenix Arizona. The ceremony took place in an outdoor amphitheater a little before sunset, with a reception a short walk away in the Wildflower Pavilion. This stylish wedding was so perfectly Meghann & Joe, and it showcased her talents as a designer and his as a musician.

Click here for Meghann & Joe's tips for throwing a gorgeous wedding without breaking the bank. Click here for the details of their menu. Click here for an hour-long playlist of songs they loved hearing at their reception. And finally, click here for a photo gallery - their wedding story in 20 pictures.

But first, let's get to know this great couple and how they got their start; as Meghann calls it, "A Tale of Two Gingers." 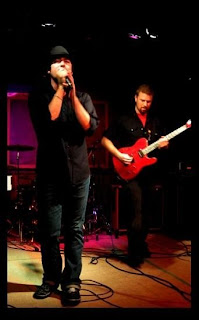 One night Meghann's roommate Natasha brought her out to see her boyfriend's band, Aurele, play a gig at a local club. Meghann remembers the guitarist first caught her eye when he took off his "goofy" knit beanie, and shoot out his golden locks. They barely spoke that night, but Joe's rocking guitar licks and unabashed stage presence caught Meghann's attention for sure.

After some maneuvering by Natasha, and Joe's bandmate Erik, and a little help from MySpace, Meghann and Joe went on their first date the day before Valentine's Day. Meghann says they decided on that date to beat the crowds - and also to break from tradition a little bit. Three years later to the day, Joe popped the question.

He tells me that even though Meghann was the one who pursued him at the start, he says "I knew that I'd be crazy to pass up a wonderful woman who was not only beautiful, but able to handle my eccentric personality." I ask Meghann when she knew he was the one for her - she said it was a feeling that just grew, slowly and surely; "It was a comfortable melding together, like meeting up with an old friend." She also knew right away that this was different from her past relationships, which she remembers as being tumultuous - with Joe it felt like "a harmonious balance of two people mutually loving each other and enjoying life together." And she tells me they make each other laugh every single day.

﻿
﻿ I ask Joe when he knew he was going to propose - he said they had already been talking about being married and about the wedding itself, but Meghann made it clear that she wanted him to set things in motion. Joe put a lot of effort into finding the right ring - "I wanted her to be able to wear the engagement ring on her right hand after we were married. I went to a local shop that deals in modern, German designs and saw the coolest damn ring I have ever seen, and I knew instantly that ring was the one."
Even with everything planned to the hilt, and an almost completely guaranteed "yes!" when the time came, sitting down to a fancy anniversary dinner, Joe felt a little nervous - but he took a deep breath and went for it. "I popped down on a knee and asked her to marry me, jammed the big-ass stainless steel ring on her finger, and that was that! I was super-duper happy!"
Posted by Bashionista at 11:07 AM