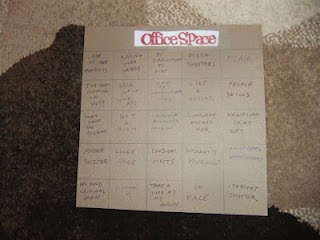 For her epic Office Space party, my friend Mary created bingo cards - the first two winners got their choice of prizes. The great thing about playing bingo? People actually pipe down and pay attention to the movie - which is especially great when most of the room knows the movie well enough to quote the entire thing.

I asked Mary about the science behind creating these bingo cards. First, she came up with a long list of quotes from the movie. Then she created the blank bingo cards - each had 5 rows and 5 columns. An 8"x8" card should be big enough to fit in wordier phrases.

The center square was a freebie - each card had either "Corporate accounts payable", "Nina speaking", or "Just a moment" - so that everyone got that square in the same breath.

Then Mary started randomly filling out the cards with the rest of the movie quotes. For the size of her party, it made sense to put each quote on 4 different cards - you'll have to adjust based on the number of cards you're making. One important note - the quotes below are divided in half, depending on when they occur. She made her cards more or less 50/50 - half the quotes occuring early on, the other half happening later. Quotes with a / between them happen at the same moment - these shouldn't both occur on the same card.

For actual game play, she passed out sticky flags to be used as markers. That way they wouldn't have to worry about keeping markers in place, and the cards could easily be reused in the future.

Without further ado, here are your bingo phrases!

First half
Mother sh*tter/son of an a$$
TPS report/cover page/memo
Whaaaaat’s happening?
Case of the Mondays
Michael…BOLTON?/No-talent a$$ clown
PC LOAD LETTER?!/ WTF does THAT mean?!
Swingline/stapler
Burn down the building
Not a p*ssy/Occupational hypnotherapist
Pizza shooters/shrimp poppers/extreme fajitas
Check out Channel 9!
A million dollars/ Two chicks at the same time
Look at my cousin/ He’s broke, don’t do sh*t
I believe you’d get your a$$ kicked
F*ckin’ A
Deeper and deeper
Not a half day or anything/ I’VE BEEN CHEATING ON YOU!!
Pet rock/Jump to Conclusions Mat
She'll get to see my "O" face
Unemployment line/Scumbags
Good for the company/Hawaiian Shirt Day
Flair/I LOVE Kung Fu/Channel 39
8 different bosses
Straight shooter/upper management
What would you say you do here, exactly?/I HAVE PEOPLE SKILLS
Meeting with the Bobs/I wouldn’t say I’ve been missing it, Bob
Superman 3/C*ck gobblers/fudge packers
Conjugal visits
Last half
I stole something/Back up in your a$$
For the crippled children?!/ How is that not stealing?
It *becomes* ours/ Initech is wrong!
Beat someone up the first day/become someone’s b*tch
Wear a rubber/Like a record/Lumbergh f*cked her
Penny-stealing wannabe criminal…man/ say hello to LUMBERGH for me!
Ratio of people to cake/just pass
Talk to payroll
Squirrels
That’s the last straw
THIS IS A F*CK!/ Mundane detail
Money laundering/Coke dealers
40 subscriptions to VIBE
Pound me in the a$$ prison/You are a very bad person
Your pretty boy Brian over there/This is me expressing myself!!
Get a room, you two!/ I HATE that guy
Storage Room B
No salt
Posted by Bashionista at 8:03 AM