As Wes Anderson movies go, The Darjeeling Limited may be the most visually breathtaking. Saturated with color and style, every shot feels iconic. There's a quietness and an absurdity to it similar to The Royal Tennenbaums, but it's less rooted in the question of where you're from than where you're going. This movie transports you when you least expect it. Not interested in a spiritual quest? You'll still have an excuse to drool over Adrien Brody and eat some Indian food. And that, my friends, is more than enough reason to host a movie night.

If you're familiar with our other movie nights (Anchorman: The Legend of Ron Burgundy; Love Actually; Fantastic Mr. Fox; and Burn After Reading), then you know that one of my favorite things to do is serve food as it appears in the movie, so you can eat along with your favorite characters. Read on to learn what food appears when, and choose to serve as many items as you care to. Click here for a fun Wes Anderson Night Playlist. And click here to wrap things up with some fodder for your Netflix queue - a list of my favorite movies featuring actors from this movie.

If you have time on your hands and a talent for cooking Indian food, by all means, feel free to cook up some dishes from scratch. However, there is no shame at all in getting takeout from your favorite Indian restaurant and serving it up at the right moment. Ordering one entree, one naan, one order of pakoras, and one mulligatawny soup per 2 or 3 people should be plenty of food. If you choose to screen Hotel Chevalier, which is a short, 13-minute film and also considered Part 1 of The Darjeeling Limited [SPOILER ALERT: contains a whole lot of Natalie Portman nudity], then you will also have the option of making hot chocolate and grilled cheese sandwiches - figure on a half-sandwich per person as an appetizer.
Before guests arrive, set out bowls of chocolate squares and savory snacks - like seeds and nuts, preferably with Indian spices. Make a pitcher of limeade ("sweet lime"), a pitcher of bloody marys, and a pitcher of iced tea. Set out a bottle of spiced rum or your favorite spirit so that people can spike their own tea or coffee. If you're serving champagne, set up a tray of glasses to be brought out just before you pop the cork. Just before you start the movie, make the grilled cheese and hot chocolate. 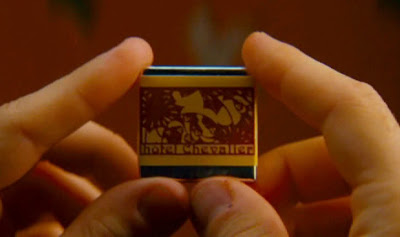 When it's time for your guests to be seated, give each person a place setting, a napkin, and a small glass and let them pour their own drinks. Take their hot drink orders - hot tea, chai or coffee. Set those mugs up in the kitchen so all you'll need to do is add hot water when the time comes.
Hotel Chevalier
Minute 6 - Jack Whitman unwraps a chocolate square one moment before his hot chocolate and grilled cheese arrive. He may not get a chance to eat his dinner, but there's no reason why you can't eat it for him!
The Darjeeling Limited

Minute 9 - The Whitman brothers are sitting in the dining car, ordering up an Indian feast. Bring out mulligatawny soup, entrees, and half the rice. Save the rest for later.

Minute 29 - Bring out the hot drinks. Put the pakoras in a 200 degree oven to warm them.
Minute 37 - The Whitmans are served what appear to be pakoras. Enjoy!
Minute 39 - The train steward pops a bottle of champagne. Bring out the bubbly! Then throw the naan in the 200 degree oven.

Minute 52 - The brothers are offered a snack - reheat whatever is left of the entrees and serve with the rest of the rice and the naan.

1:20 - Breakfast is served at the convent. Bring out some toast with jam and butter and some sliced mango.

After the movie, invite your guests to relax and mingle. Press play on one of our themed music mixes, fire up a hookah and extend the party long into the night.
Posted by Bashionista at 9:09 AM