Meet the 8 Authors from the Endowment for Unexceptional Humans 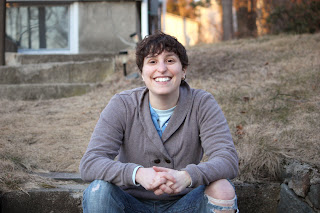 This Friday, the Endowment for Unexceptional Humans is holding a fundraiser; 8 Authors will give short readings of their work, and then auction off 9 items to benefit the Endowment. Come out and show your support - 8pm on Friday, May 11, First Church Somerville, 89 College Ave., Somerville, MA.

Join us on Friday for a playlist of songs to accompany a gala full of fascinating people, and click here for the skinny on throwing an event like this yourself.

For now, read on to learn about the authors who'll be performing tomorrow night:

is from Massachusetts, and lives with her wife in Arlington. A former poetry fellow at The Writers’ Room of Boston, she was recently a featured reader in the Boston’s Best U35 Reading Series and has poetry forthcoming in Broad! and Each Moment a Mountain. Currently, Hannah teaches writing at Pine Manor College and is working on her second book of poems—about Vice-Presidents. Her first book, Odd of the Ordinary, is awaiting publication.

Excerpt from "The Cattle Battle" from stopbuyingstuffmagazine.com:

Spent with another lover, I drunk dialed
my first girlfriend. Claimed I was sober
but whiskey talks. Unsteady now, I should've
written a letter. But there's something about
breathing: being in its face, hearing a kind
of heaviness on the other end. 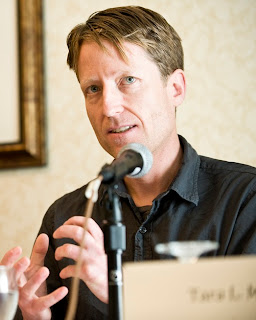 has been published in Versal, Press 53, The Los Angeles Review, Flash Fiction Forward, Southeast Review and elsewhere. Screen adaptations of his stories, “How to Set a House on Fire”; “North End, 2010”; and “Why I Don’t Keep A Daily Planner” have received numerous awards and showcases.  At present, he is a writing instructor at Emmanuel College and Grub Street as well as writer-in-residence at the Institute of Contemporary Art, Boston.

Excerpt from "Things Like This Drive Me Out of My Mind" from NightTrainMagazine.com:

About this time my new girl Haley pokes her head from under the down comforter. The top of her hair looks like she's been hit by an electric charge; the sides are damp from the pillow. She's that kind of dreamer. 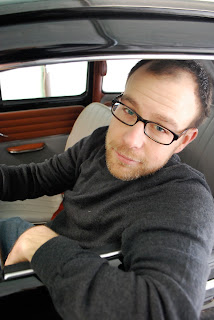 is the author of the novel How to Keep Your Volkswagen Alive (Melville House, 2011) and the Managing Editor of Post Road Magazine.  He lives in the Boston area and teaches writing and literature at Boston College.

Excerpt from How to Keep Your Volkswagen Alive:

That afternoon we held a birthday party for my son, the 1971 Volkswagen Beetle. He was turning two, a quite young tide in Volkswagen years, so we set up some tables at Pulaski Park in Northampton, invited his friends from school - second graders, most of them - and ordered food from Nini's (detective stories for the Beetle, pizza for everyone else). And a number of people brought cake - there must have been six or seven different kinds of cake to choose from.

is the author of The Sweet Relief of Missing Children (W.W. Norton). Her stories and essays have appeared in  Ploughshares, Nylon magazine, and on NPR’s All Things Considered. She teaches at the University of Southern Maine Stonecoast MFA program and Harvard Extension School.

Excerpt from The Sweet Relief of Missing Children:

She knew to watch her back. She knew to avoid slow cars driven by men in sunglasses. She knew, at home alone, to say to the stranger on the phone, "My mother's in the shower now. Shall I have her call you back?"

She would never say she was home alone, nor take the shortcut through the alley. All these warnings, all this advice, the real message was: You are precious. You are precious but you are not free. You can't be both. 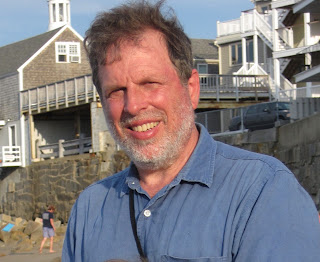 His poetry and essays have appeared in such places as West Branch, The Journal, Willow Springs, Zone 3, Sonora Review, Ascent, Fifth Wednesday Journal, and Tampa Review. He is the author of two poetry chapbooks: Trailing It Home (Main Street Rag Publishing Company) and Talk at Large (Finishing Line Press). Brad teaches literature courses at Lesley University and poetry workshops in a variety of settings.

Excerpt from "Trailing it Home", from MainStreetRag.com:

Expelled from the woods at noon,
bark-brown, reeking of swamp,
with tender, palmate antlers
weightless over his bulk,
he clopped down
the town's main street,
his eyes fogged and serene
like a martyr's. 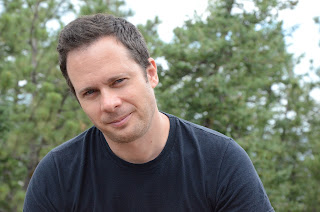 is the author of a novel, Busy Monsters, published by W.W. Norton (2011). He is Senior Fiction Editor for the journal AGNI at Boston University, and is a regular contributor to The New York Times Book Review. His nonfiction and fiction have appeared in Harper’s, Salon, and Kenyon Review, among others. Twice his work has been listed among “Most Notable Essays” in Best American Essays. His next two books, a novel and memoir, are forthcoming.

No beer in a bar, much less sex in my car, but just the two of us perched on the top step outside her one-bedroom prefab townhouse with a cheese pie so succulent it rendered us speechless for minutes at a time. She had said that, lifesaver though I was, if I attempted anything wacky or even suggestively satanic, she’d go succubus on my ass—she had studied ninjutsu and Descartes and knew how one enhances the other—“so don’t get snaky,” she said —and I warmed with admiration. Here was a gal with gumption, sang­froid, with a Virginia voice that might melt wrought iron. In the driveway slept her yellow Volkswagen Beetle, the face of a whopping flower painted on the hood and testifying to goodness. 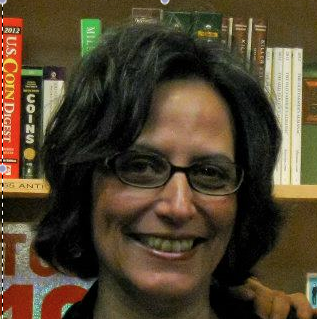 Excerpt from "Old Body" from Terrain:

I am two dead babies so far. One more
and it will be almost my mother's story, too,
the same dumb well
that can't wail and carry on for its own sake.
Though in comparison, my life is charmed,
. . . Still my babies follow me everywhere,
enter our dirty mixed up family with tender feet.
Joining so many other ghost babies at the table. 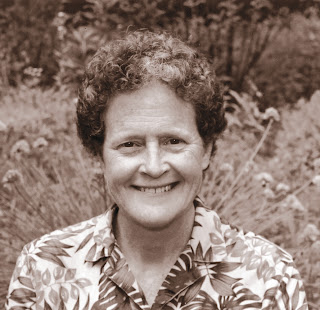 Her book of poems, Cathedral of Wish, was published in 2005 by Four Way Books. Cammy's poems have appeared in Agenda, Eclipse, The Healing Muse, Marlboro Review, Runes, Sahara and elsewhere. She lives in Lexington,
Massachusetts, and teaches English at Concord Academy.

Excerpt from "Fall" from Cathedral of Wish:

of bronze roses it fell out of a family picture
my father dismayed again amazed at himself
Posted by Bashionista at 10:30 AM