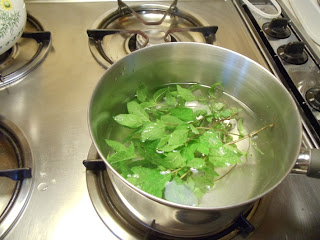 I don't know about you, but I could use a drink right about now. Here to help us out in that department is . . . my Dad! Apparently, he and my Mom have been enjoying a nightcap in the evenings this summer, using mint from his own garden. Take advantage of Indian Summer, mix up a pitcher of delicious Juleps, and get thee to a veranda, post haste. 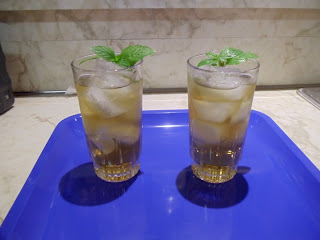 Add water and sugar to a sauce pan.  Heat and stir occasionally until the sugar is dissolved.  Remove from the heat and add the mint.  When the pan has cooled to near room temperature, remove and discard the mint.  The mint syrup can be refrigerated for several days.
To make the julep:
Add 1-2oz of Bourbon to a tall tumbler.  Add 4oz of the mint syrup and fill with ice and add the mint garnish.
Makes 8 servings

Posted by Bashionista at 11:29 AM 0 comments

What happens if you throw a party and invite friends who recently broke up - and then they both show up, bringing their respective posses. How are you supposed to keep the peace?

- Kristen B
﻿
﻿﻿
﻿Girrrrrl, get yourself a time machine, because that's about the only thing that'll help. The fact is, once you're in the middle of a turf war, there's not a lot you can do about it.

Now as a host, I hate choosing between friends who have unchosen each other. Typically, I don't; I invite them both on evite (or the social networking venue du jour) so that everyone knows ahead of time who's coming. I trust people to be grown-ups and manage their own messes; if they shouldn't be in the same room together, no one knows that better than the two of them.

Of course, there are moments during the grieving/loathing process when people do not exercise their best judgement, and there are times when a man or woman scorned might start to see your living room as the perfect place to try their case before a jury of their peers, at high volume and with a maximum of hair pulling. Here are some ways that you  can avoid throwing a party that requires police intervention:

Keep tabs on who's planning on showing up. If you happen to notice that two sworn enemies are in the mix, consider dropping one of them a note - something along the lines of, "Hey Nancy, I noticed that you and Sid are both planning on coming on Saturday. Of course I would *love* to see both of you, but I just wanted to give you a heads up so you aren't uncomfortable."

If the worst happens, and both sides show up armed to the teeth do what you can to subtly keep the peace. Try keeping the posses separated as much as you can. Asking members of the militant entourage for some emergency help in the kitchen is a good way to divide and conquer. If things are seriously tense, don't be shy about pulling aside a few of your most discrete, assertive, or physically imposing friends, let them know the situation, and ask them to help you keep an eye on things. If anything starts to get out of hand, they should have your back.
Posted by Bashionista at 9:12 AM 2 comments